Krk venue from the beginning – a short story

In December 2020, OSMA Academy organized an online event “OSMA Gifting celebration” with sixteen people contributing songs, stories, poems, videos and views, as their personal gifts to the OSMA community. My contribution was a 5-minute power point photo presentation on the development of the Krk venue. I’d like to share it on the OSMA blog, presented as a picture gallery, though unfortunately without the Vivaldi Spring background music. It wasn’t an easy task to prepare this .ppt, because of time constraints and the enormous amount of old photographs kept mainly in Hermina’s archives. I hope that I’ve depicted the essence of what was happening and how it all developed.

The Krt family and my family (Javornik-Cregeen) met soon after we moved to Kranj in 1988 through our daughters being together in kindergarten. Since then we have remained close family friends, with frequent visits, regular skiing in the Dolomiti, feasting at English style Xmas parties, and sharing the Krt’s seaside caravan in Poreč and later on Krk. In 2002, it was a good time for investment, so Hermina and Zvone toured the island of Krk, seeking potential real estate to fulfil their dream of a stone house, the scent of lavender and rosemary, the deep blue sea and the hot summer sun. They found somewhere, which was going to need a huge amount of imagination, courage, hard work, administrative skills and persistence to make it real. Little by little, almost literally stone by stone, they established a delightful ambient, restoring the stone house to its original state, harmoniously adapting the accompanying buildings, and planting plenty of lavender, rosemary and other scented greenery. It became an idyllic place to rest, relax, enjoy and meditate. Then they took on another, more ambitious task – to build a small hotel in the vicinity for holidaymakers and as a retreat providing an attractive venue for seminars, training and contemplation. They’ve succeeded! 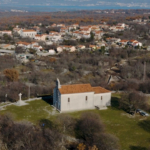 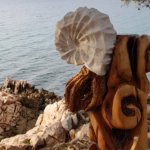